Earlier this year, we were contacted by a woman named Penny Mannings who asked whether we might be interested in several items that had recently come into her possession.

While sorting through her late mother’s belongings, Penny found a large pack of newspaper clippings from the period 1932 to 1938. Each clipping had been written by Constance Waller. Although she had never met Constance, Penny knew that she was her maternal grandfather’s (Harold Barkworth) second wife, and, therefore, technically her step-grandmother.

Intrigued, Penny did some further digging, discovering a series of photographs depicting Constance and other women in various football settings. A big clue as to their provenance came in the form of the words ‘Huddersfield Atalanta Club – Football Team – 1921’ inscribed on the bottom of one of the team portraits.

Penny’s boss, who has a keen interest in all things sporting, informed her that, in a case of pure serendipity, the Marsden-based Mikron Theatre was touring an Amanda Whittington play entitled Atalanta Forever—and, even more remarkably, Constance was the one of the main characters.

As regular readers will no doubt be aware, Constance, who later went by Mary, was the founder of the Atalanta Sports Club, which from November 1920 aimed “to provide games for the women of Huddersfield, to foster a sporting spirit, and love of honour among its members.”

It was Birkby-dwelling Constance who chose the club’s unique moniker—an ode to the heroine from Greek mythology who could beat any mortal, male or female, in a foot race. She was not, however, content to play the role of muse. On the contrary, she chaired and captained the football side from its base at Sands House in Crosland Moor, even chipping in with a few goals now and then.

Much has been written, here and elsewhere, about Atalanta and Constance’s exploits in 1921: how they captured the public’s imagination, drawing more than 15,000 fans to Leeds Road for their tie with Bath Ladies; how they played the legendary Dick, Kerr Ladies at Hillsborough in front of a crowd of 25,000; how they went to-to-toe with a French XI team at Fartown; how they trained with Huddersfield Town icons such as Billy Smith; how they raised thousands of pounds for local charities and good causes; and how they limped on after the Football Association (F.A.). banned the women’s game on 5th December of the same year.

Described by one of her contemporaries as an “advanced feminist”, the bob-haired Constance appeared to care little for the rules, opinions, and obstacles of the patriarchy.

Ever the torchbearer, in the years following the ban, she went on to become the Huddersfield Daily Examiner’s first female journalist. She must have made quite the impression because, as an article in the very same newspaper beamed in January 1958, she was “probably also the first woman to sit shoulder to shoulder with male colleagues in the press box reporting football matches for the national press.”

And it was not just football. In the 1930s, Constance’s pieces for the Daily Express and Sunday Express covered a wide range of topics, including the career of the so-called “Hercules of Huddersfield”, wrestler Douglas Clark.

Reflecting on her connection with Constance, Penny adopts a positive outlook, tinged, perhaps, by what the Welsh call hiraeth:

“I never met her, which may have been her choice, and had no idea of her existence. My grandparents were divorced in the Old Bailey, and it was a big thing. I imagine the stigma meant that there was no mention of what happened next. Looking at the text of the articles, and how innovative she was in women’s football, I think she is someone who I would have liked to meet. She clearly had a sense of humour and a sharp mind. I am also a sports fan and I believe we would have been good friends.”

As much as Constance was lost to Penny, she was lost to the rest of us. Like many women footballers from the inter-war period (see the story of Lizzy Ashcroft), Constance appears to have kept quiet about her ball-kicking yesteryears. Indeed, a note from reporter Stephen Watts to Harold Barkworth expressed genuine surprise at the contents of the aforementioned Examiner profile:

“My sister in Huddersfield sent me with her last letter—and without comment—the enclosed cutting which may mildly amuse Mary and yourself. It did me as I never suspected she had a soccer past.”

Now, like Mr. Watts, our ignorance has thankfully been divested. The contribution made by Constance, her Atalanta sisters, and all the other pioneering women of the teens and twenties may have been omitted or overlooked for a long while; but just because it was ever thus, does not mean it will ever be.

Girls and women are an integral part of the story of football in Huddersfield and beyond. They have always played a starring role.

For that reason, and to make good on the clarion call, “Atalanta Forever”, we have decided to induct Constance Waller into the Huddersfield Town Heritage Project Hall of Fame.

As far as we can tell, Penny’s haul includes five photographs that the public have never laid eyes on.

Photograph number one shows a proud Constance in a Huddersfield Town shirt. This is strikingly similar to a portrait of an unknown Atalanta player that appeared on eBay some years ago: 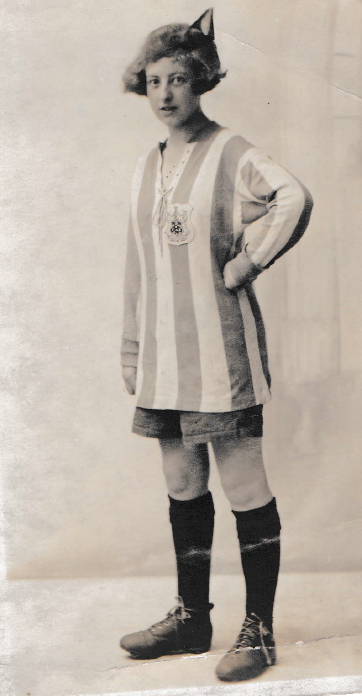 Number two is a team photograph, presumably taken in the summer of 1921 or 1922. We think Constance is on the far right of the middle row: 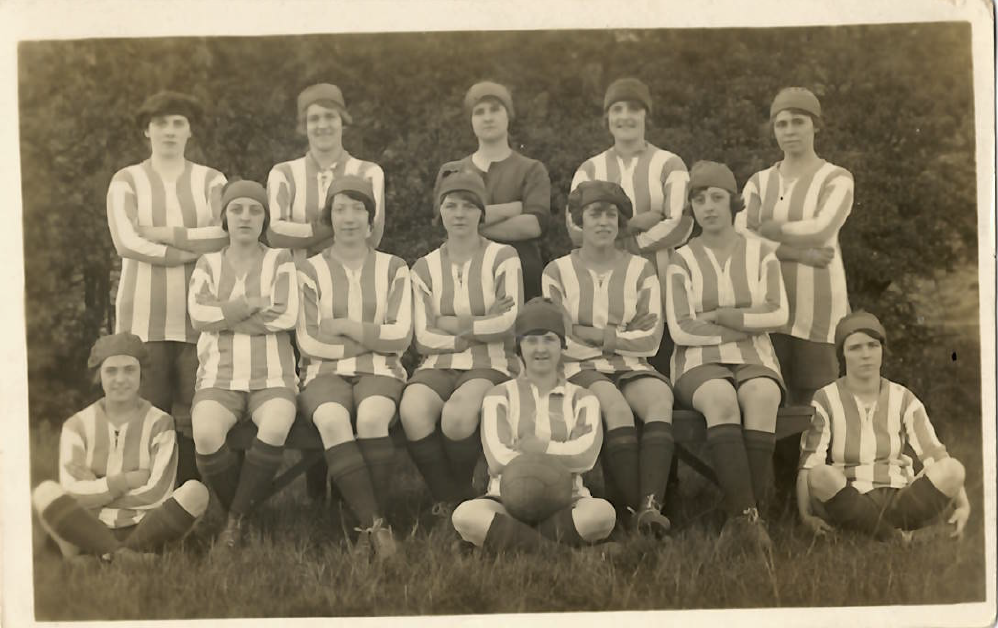 Number three shows three Atalanta players outside the club house in Crosland Moor (we think), while the nurse from the famous 1921 team photo glares through a window:

Number four is a snapshot of three Atalanta players (again, we think) leaning against a wall: 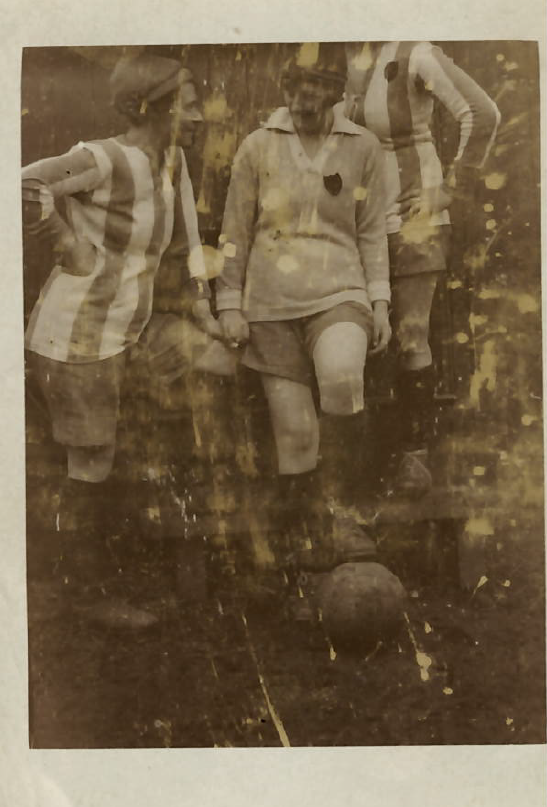 And, finally, number five shows Constance and Harold walking in the sunshine, maybe sometime in the 1950s: 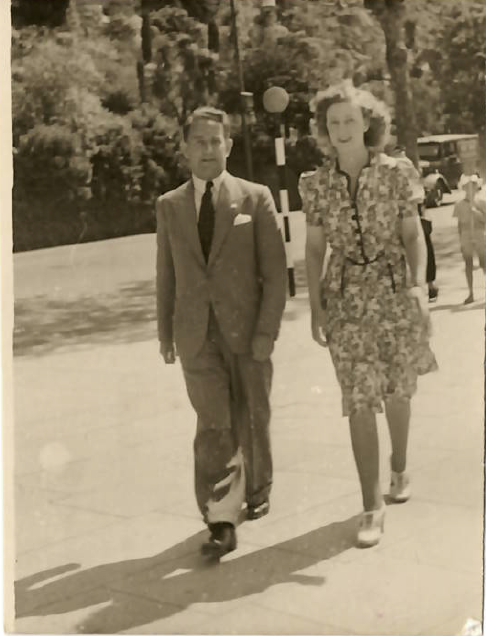 If you are interested in supporting Huddersfield Town Women, their website can be found here, where you can stay up to date with results, team news, and match reports. You can also help sponsor women's team players, who have to pay to play.