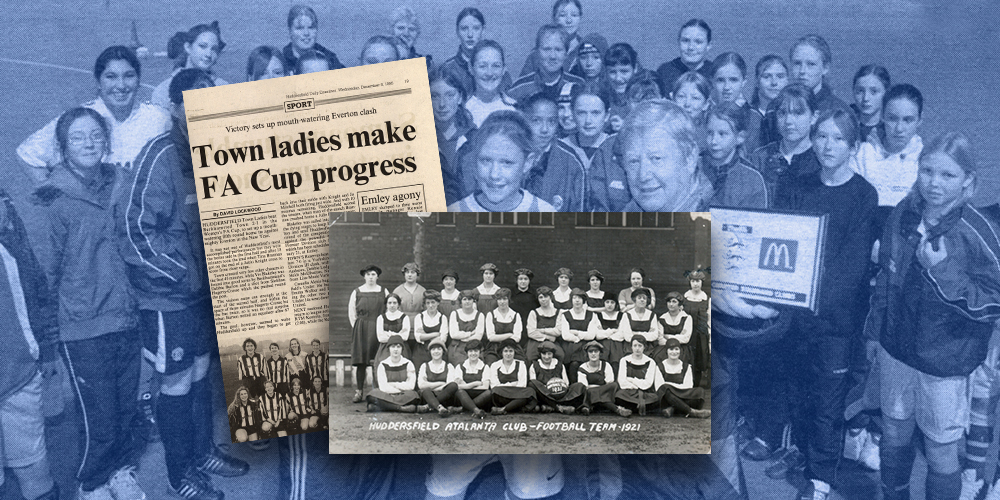 Women’s football in Huddersfield has a longer history than most imagine. Just as people flocked to watch the likes of Dick, Kerr Ladies during and after the First World War, they also turned out to cheer on Huddersfield Ladies, Huddersfield Alexandra, and Huddersfield Atalanta. The latter were the most popular of the local sides, regularly drawing crowds in their thousands to exhibition and cup matches as far and wide as Salendine Nook and Hillsborough. At the height of their popularity, in 1921, 15,246 souls piled into Leeds Road to watch Atalanta beat Bath Ladies 1-0.

Sadly, the Football Association all but banned the women’s game a few months later. The ban stayed in place until 1971, and it was not until 1988 that another women’s team of note bore the name Huddersfield—in this case, Huddersfield Ladies F.C. In 1993, the Ladies merged with Huddersfield Juniors to become Huddersfield Town Ladies F.C. In 2019, the club changed its name to Huddersfield Town Women F.C. They currently compete in the F.A. Women’s National League North and play their games at the Stafflex arena, near Storthes Hall.

This collection contains photographs, matchday programmes, and media clippings which shed new light on this proud past.