Ahead of today’s Remembrance game, HTSA members spent the morning tidying up Thomas Carter’s grave in Edgerton Cemetery. After scrubbing the headstone with toothbrushes and cutting the surrounding grass, they laid a wreath, flowers, and Town pennant as a mark of respect.

For those who are unaware, Thomas ‘Tom’ Carter was a Town player who was killed on active duty during the Second World War.

Carter was born in Huddersfield in 1923. As a teenager, he played in the local amateur leagues, before signing for his hometown club sometime in 1940, only a few months after Britain had declared war on Germany and the Football League decided to suspend the season.

Carter never made it into the first team, who by this point were plying their trade in the regionalised Wartime League. That said, an Examiner retrospective from 2011 described him as a “promising half-back”, and we know that he turned out for the reserve team on a number of occasions.

Perhaps most significantly, Carter was in the Town side that beat Bradford Rovers 2-1 to clinch the 1941 West Riding County Amateur Cup.

Although records from this period are patchy, John M. Ward’s private archive lists a ‘Carter, T’ in the starting line-up for three other reserve matches. These include a 1-0 away win against Halifax Army on 26th April, 1941, a visit to Thornhill Edge on 15th November of the same year, and a tie at Guiseley in January 1942.

According to historian Roger Pashby, Carter joined the Royal Navy soon thereafter. He served as an Able Seaman on the HMS Albrighton, a Type III Hunt-class destroyer named for a famous Staffordshire hunt and assigned to the First Destroyer Flotilla.

On the night of 27th and 28th April, 1943, the Albrighton and its sister ship, HMS Goathland, were deployed off the coast of Brittany, where they engaged an enemy convoy. After a fierce skirmish, the pair sank the Italian blockade runner Butterfly and the German anti-submarine trawler UJ1402. The Albrighton, however, suffered substantial damage. 25 crew members were wounded and eight died.

Thomas Carter, aged just 20, was one of those eight.

He is buried at Edgerton Cemetery, Huddersfield, in a Commonwealth war grave. In retelling Carter’s story, we hope that Town fans will join us in remembering and honouring his life, as well as the lives of all those—servicepeople and civilians—tragically killed by the scourge of war. 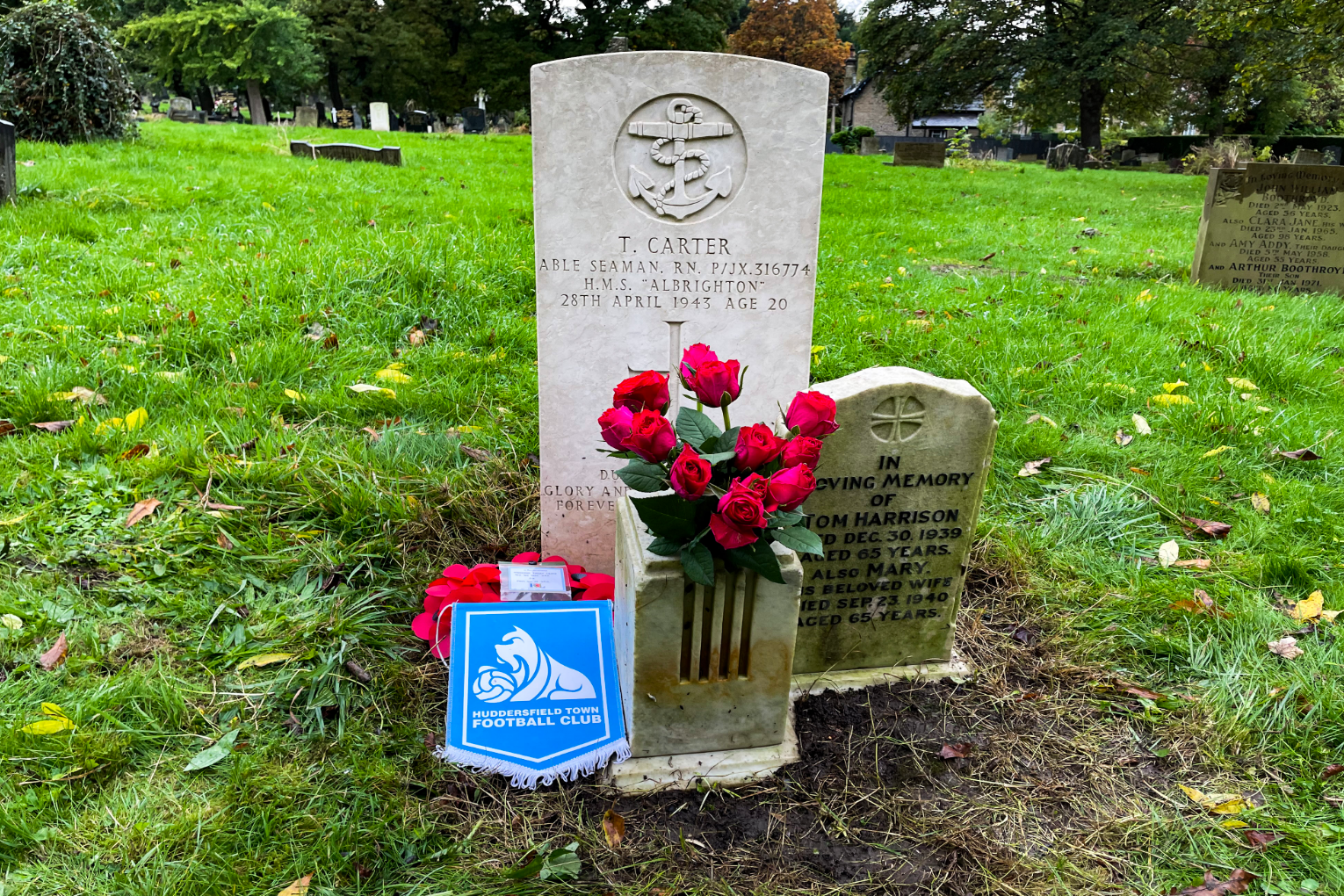 The Heritage Project Roll of Honour

13 other men who played for Huddersfield Town lost their lives in armed conflicts between 1914 and 1946.

You can find out more about them through the Heritage Project Roll of Honour.

All proceeds from the Huddersfield Town ‘Poppy Crest Pin Badge’ go to the Royal British Legion, a charity providing financial, social and emotional support to members and veterans of the British Armed Forces, their families and dependants.

War Child is a charity that supports children and young people affected by armed conflict and war across the world. They work with parents, caregivers, community members, NGOs, governments, businesses, and other partners worldwide to ensure children have access to protection, education, and psychosocial support. You can make a one-off gift or set up a monthly donation.

Players’ union FIFPRO recently launched a fundraiser to help more than 75 women footballers evacuated from Afghanistan in August. According to FIFPRO, the global fundraising campaign will provide support for the Afghan players to settle and rebuild their lives in a new country. Many of them have arrived in Australia after its government helped them escape from the immediate danger they were in as women activists. Donate here.