This article is part of a wider series that explores Huddersfield Town’s successful 1921-22 F.A. Cup campaign.

Read about Town’s first round clash with Burnley.

By late January, 1922, England was in the grip of a full-blown flu epidemic.

With the chaos of recent outbreaks fresh in the nation’s memory, and newspapers listing daily cases and fatalities, a degree of caution had gradually crept back into public life. Some people wore face coverings, others smothered themselves in camphor, while still more opted to stay at home whenever possible.

The latter group immediately drew the ire of certain establishment figures, including one Reverend Adam Hamilton, who ministered to the Alexandra Road Congregational Church in the South Shore area of Blackpool. During an especially unfriendly sermon delivered to mark Candlemas, Hamilton noted the empty pews in front of him with disdain, before bluntly questioning his flock’s piety. When it was put to him that epidemiological factors might be to blame, Hamilton dismissed the notion, pointing out that Blackpool was one of the fittest municipalities in the country and a self-declared health resort.

Huddersfield Town’s finest were well aware of the seaside town’s restorative powers, having already spent a good portion of the season relaxing in its spas, playing on its putting greens, and ambling along its promenade.

True to form, then, the team prepared for their second round F.A. Cup tie away at Third Division Brighton & Hove Albion by decamping to the leafy suburb of Lytham. An Examiner report published on Friday, 27th January, a day before the game, describes a by now familiar scene:

“In addition to the usual walks and golfing exercises, the members of the team have taken part in billiards handicaps, and of course, Clem Stephenson has emerged successfully again. He won the handicap, made breaks of 69, 54, and 40 odd, and in the flying handicap he was 50 behind scratch. Islip was the second in the ordinary handicap.”

The camp’s good mood was only slightly dampened by the spectre of a persistent cough and fever. Unlike the good reverend, the Town Board of Directors took every precaution not only to prevent a flare-up, but to minimise the consequences should their initial efforts fail. As the Examiner relayed:

“In order to prepare for emergencies several reserve players have been ordered to join the party, for one never knows when the dreaded ‘flu’ may strike down anyone in these days.”

Whatever the outcome, it was assumed that Herbert Chapman’s men would be equal to the task at hand. After all, Brighton were two steps below them, finished the previous season in 18th place, and had carried their poor form into the new year. Town, by contrast, sat 8th in the First Division. This led some local sports journalists to present the fixture as a formality, as if Stephenson and company merely had to turn up to secure their place in the competition.

Their counterparts on the South Coast were less sure. They rightly observed that the Albion had already scalped top-tier Sheffield United in the first round and were celebrating an unexpected 3-0 victory over Portsmouth in the league. To be sure, there was a subtle confidence among the Brighton higher-ups, arguably typified by an unnamed director’s comments to the Portsmouth Evening News in the run up to the game: “[I]t should not be impossible to conquer Huddersfield.”

Town left Lancashire for London on the Friday, staying overnight at the Grand Central Hotel, and made the trip to Hove the following morning.

Kitted out in white shirts and black shorts to avoid a colour clash, they were greeted by glorious sunshine, a pitch “in capital condition”, and 22,441 spectators—a record attendance for the Goldstone Ground and no doubt a great annoyance to our friend Hamilton. 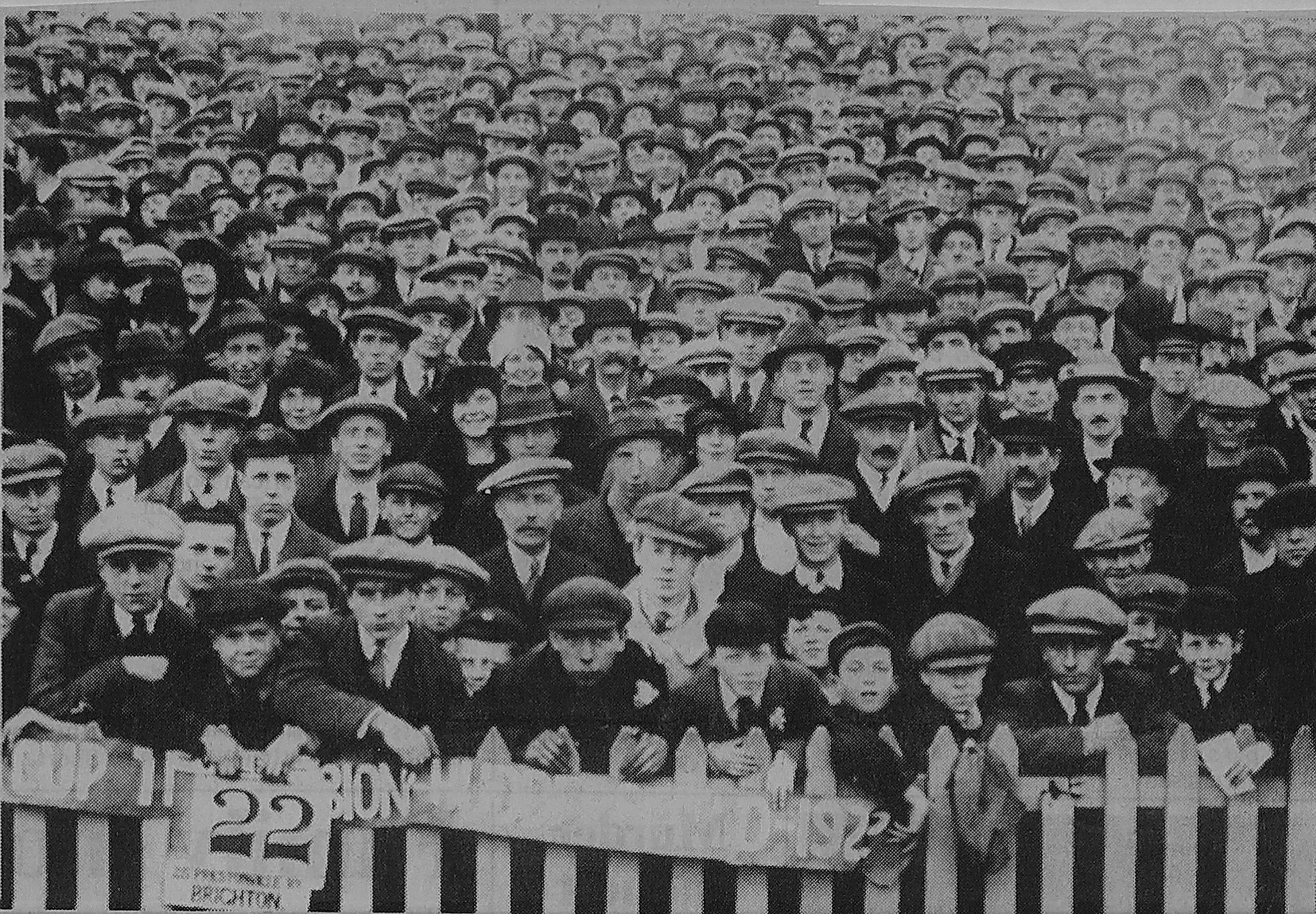 There were no surprises in the line-up. Davis was in net. Wood and Wadsworth took up the full back positions. In midfield, Wilson played as the halfback, with Watson at left half and Slade at right half. Smith was on the left wing and Stanley Pearson was on the right. Stephenson started at insight left, Frank Mann filled in at inside right, and Islip was the centre forward.

Town dominated the opening phases of play, taking advantage of the trim surface to set a quick pace that the home side struggled to equal. This early ascendancy nearly paid dividends in the seventh minute when Smith picked the ball up in the box and laid it off to Stephenson, whose shot hit the post, rebounding away from any imminent danger.

And then, well, not much.

Most match reports depict Stephenson’s flirtation with the upright as the highlight of the entire 90 minutes. None were so uncharitable, however, as the Sheffield Daily Telegraph, which flatly stated that the game “was not particularly interesting.” Pearson threatened for Town in the last fifteen, but in general, the game followed the same pattern throughout: The First Division side enjoyed the lion’s share of possession, while the Third Division side successfully stopped them from doing anything with it.

On balance, a goalless draw was judged to be a fair result. The Leeds Mercury was full of admiration for Brighton’s gameplan and tenacity, praising the midfield three and full backs for their “relentless” efforts to “[bustle] the Town forwards off their usual game.” A letter to the editor in the Examiner dated 30th January concurred.

In any case, Brighton had earned the right to play at Leeds Road.

Town returned to the North West on Saturday night, only to be greeted by some unpleasant news: Wood’s mother had passed away. The replay was scheduled to take place on the afternoon of Wednesday, 1st February, so it would have been perfectly understandable for him to withdraw from selection. Instead, he made it clear that he wanted to be involved.

Further inland, Huddersfield was once again abuzz with cup-tie reverie. According to the Examiner, on the day of the match, “Many of the local mills and places of business were closed, and others were working with depleted staffs because of this great sporting excitement.” The crowd was recorded as 28,086—good for a weekday, but significantly less than the Burnley game.

Chapman made a single change to the starting eleven, bringing in Richardson for Pearson. Brighton’s team sheet read the same as the weekend.

Despite a few hours of sun and a “liberal application” of sand, the pitch was a mess at kick-off. Even worse, the “thick, sticky mud” suited the visitors’ defensive style. It also made it difficult for Town to implement their favoured passing game—“closely-combined football of the Scottish type,” as one reporter put it. Town had much of the ball, as they did in Sussex, but Brighton’s players remained disciplined, adeptly blocking off space and covering one another.

It is telling that the Yorkshire Evening Post dedicated most of its coverage of the first half to a comical interlude:

“A long pass by Watson up the line side would have gone out of play, and a policeman on duty sought to save some time by kicking it back. This was a supplement to the game for which the laws do not allow, and after a mild admonition to the zealous officer, the referee restarted play at the corner by bouncing the ball.”

After the break, Town changed their approach, hitting long balls out to the flanks early and often. This proved to be an effective tactic, unsettling the Brighton back line, and giving creative forwards such as Smith and Richardson more opportunities to influence the game.

With 57 minutes on the clock, Town finally turned their advantage into a lead. Hayes palmed a shot from Islip into the path of Stephenson, who reacted quickly with a tap in.

On 75 minutes, Richardson collected a pass from Smith outside the box. He jinked in and out of the Brighton defenders, then shot from ten yards out.

The next day, the Examiner reflected on the eventual triumph and the challenges that lay ahead:

“Town deserved to go through into the third round. They have not been stung by any of the ‘R’s’ yet, and they have now to endeavour to take the sting out of the Rovers at Blackburn.”

The Yorkshire Post and Leeds Intelligencer thought they could: “It is difficult to imagine a team with better prospects in the succeeding stages.”

Header image: Page 12 of The Leeds Mercury on Thursday, 2nd February, 1922. The caption reads: "BRIGHTON BEATEN IN RE-PLAY—One of the Brighton backs clearing from Islip, the Huddersfield Town centre-forward, in yesterday's Cup-tie re-play at Huddersfield (Mercury)."